“..certainly silly things do cease to be silly if they are done by sensible people in an impudent way. Wickedness is always wickedness, but folly is not always folly.—It depends upon the character of those who handle it.”

Thus the heroine describes Frank Churchill, who has surprised her by admitting he posted to London merely to get his hair cut. She knew him to be a charming fellow, with good address and a handsome appearance. From this she inferred him to be of good character and sensibility.

Seems he might have to go back for another haircut.

Now she is not so sure.

Tonnish gentlemen valued a good barber, particularly one who was awake on every suit in the dressing of hair. But Mr. Churchill wasn’t seeking such services because they were scarce in the country. He went to London at great expense and difficulty to attend to his appearance because of the reaction such impulsive conduct would provoke in others.

He was proud, impudently so, of his folly.

Impudence is the lightning rod that strikes the placid treeline of Regency society. Jane Austen uses the impudent character to put her heroes and heroines in a bustle. Her Churchills and Willoughbys and Wickhams bring conflict and disorder to what would normally be harmonious and orderly.

What Marianne saw in him I confess I shall never know.

‘Brandon is just the kind of man,’ said Willoughby one day when they were talking of him together, ‘whom everybody speaks well of, and nobody cares about; whom all are delighted to see, and nobody remembers to talk to.’

Austen heightens the tension the impudent character brings by placing him very near to his polar opposite. Fully aware of this contrast, the impudent Willoughby does not shrink from commenting on Colonel Brandon’s character.  He is so far unrepentant of his impudence he can scarcely refrain from making the insult so exquisitely wrought in the passage above.

What a bore to be like Colonel Brandon. Now this is impudence indeed!

Mr. Wickham is perhaps the most impudent of Austen characters. Without him, the delicious sparring between hero and heroine would be rather less so. It is near the end of  Pride and Prejudice when the author unveils the tip of impudence’s sword, sharpening folly’s dull blade without warning.

When Wickham returns after marrying Lydia, darling Lizzie is amazed.  She expected Lydia to declare herself well-satisfied, for that gel is unthinking folly itself. But Wickham had been positively constrained to enter into wedlock. Chagrined was he? Indeed, no! Miss Bennet learns a valuable lesson from this unveiling, leaving her to resolve privately that henceforth she will “draw no limits in future to the impudence of an impudent man.”

But my favorite illustration of Wickham’s impudence is delivered by Mr. Bennet.  Mr. Collins has the effrontery to warn against an alliance between the rector’s daughter and Mr. Darcy. Couched in the following ode to such unconscious foolishness, Mr. Bennet makes a despairing admission.

“I cannot help giving [Mr. Collins] precedence even over Mr. Wickham, much as I value the impudence and hypocrisy of my son-in-law.”

Mr. Collins is completely unaware of how offensive his conduct is, immersed as he is in self-satisfaction. Mr. Bennet finds this amusing. But he views Wickham’s behavior with grim dismay.  Lydia’s happiness has been placed in careless, selfish hands.

Her father is particularly bothered since he knows Mr. Wickham knows. Impudence is very self-aware. It appreciates the consequences of its conduct. 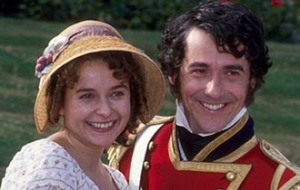