“She seems rather eager, does she not?” Diana whispered behind her fan.

Vivien refused to turn around and look.  She and Diana were among the very few privileged to witness the marriage of Princess Charlotte to His Highness of Saxe-Coburg.  And if she were to crane her neck at the approach of the Regent’s daughter, it would be noticed as vulgar and remarked upon.  Diana, being the taller, had only to turn her head very slightly to see above the heads of other countesses as they sat on cushioned chairs in Carlton House’s great drawing room.

Presently Her Highness came into view and Vivien realized the justice of Diana’s observation.  The princess had a favorable aspect, fair and well-formed, but instead of walking with an upright, measured tread on her bridegroom’s arm, she bustled forward down the aisle, her progress somewhat erratic.  The lovely metallic sparkle of her dress trembled as if irritated, revealing the bride’s almost unseemly pace as they approached the altar where the old Queen and the Regent were ranged alongside the Archbishop of Canterbury.

The heiress-presumptive was a hurly-burly miss.

Vivien noted with approval how Prince Leopold gently squeezed Her Highness’ arm, distracting the princess from her headlong pace.  She paused and looked up in his handsome face in an inquiring way.  Then her face broke into a happy grin as if she had recollected some word of advice. She paused, drawing herself up and proceeded at a decidedly slower pace, in keeping with the regal progress of one who would someday be Queen.

From all accounts, it appears that Princess Charlotte, hurly-burly as she might have been, had a happy marriage.  A wonderful example of how two very different persons together make a better union than if they were separate.  And we rightly suspect Kate and Wills will have the same success that often flows from the union of two very different people, from vastly different backgrounds. 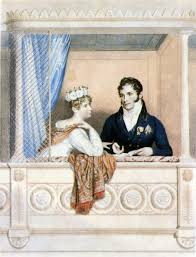 Princess Charlotte of Wales had been largely kept “out of the way’ by her father, the Prince Regent, particularly when his marital discord had given him an unpopular reputation.  No doubt this isolation contributed to the princess’  lack of social grace. Hardly what one would expect from the daughter of the First Gentleman of Europe.

Prince Leopold, on the other hand, was well-traveled and a familiar face in European diplomatic circles, having spent time in the retinue of the Tsar.  With his continental background, Leopold would have immediately discerned Charlotte’s gauche demeanor.  He might have even been repelled by it.  But instead of turning away, witnesses describe Leopold as an affectionate husband who sought to guide his bride with loving advice.

A fair exchange, perhaps.  Her Highness reportedly giggled when the prince, a man as poor as a church mouse, vowed to endow her with all his worldly goods.