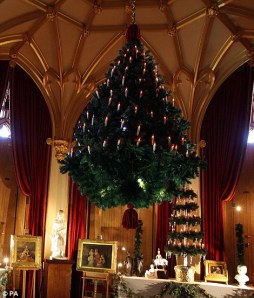 In 1844, long after the events in Notorious Vow and Notorious Match, Diana and Vivien attended the young Queen Victoria and her husband, Prince Albert, at Windsor Castle.  The countess and marchioness were astonished to see a tree suspended from the ceiling of the Octagon Dining Room, where the chandelier is normally hung.

In the German tradition, Queen Victoria and Prince Albert exchanged gifts on Christmas Eve and presents were laid out on tables, each of which had a Christmas tree at its centre.  Two gift tables will be recreated with presents exchanged by Victoria and Albert.  Among the highlights is a painting by Sir Charles Eastlake commissioned by Victoria in 1844 as a gift for Albert, and a sculpture of Princess Beatrice as a baby lying in a shell, given to the Queen by Prince Albert for Christmas 1858.

In the Castle’s State Dining Room, the table will be laid for a Victorian Christmas feast with a magnificent porcelain dessert service by Minton of Staffordshire.  Known as the Victoria Service, the set was purchased by the Queen at the Great Exhibition in 1851 and includes four porcelain figures of the four seasons, ice pails, cream and bon-bon dishes, and a pair of silver-gilt sauceboats shaped like sleighs.

This special display has been recreated for the public’s viewing and ends on January 8th. 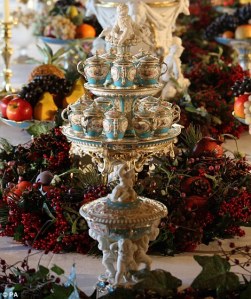 15 thoughts on “Christmas at Windsor Castle”