“Shall I read some of that fellow Byron’s poetry to you, Miss Montgomery?” he asked, picking up a volume from a side table.

The look of distaste on his face at his own suggestion made Vivien chuckle and shake her head.

“Are you, like all the rest, pining at his loss?”  Northam asked.  “A shame he decided to leave the country.”

“We went to Harrow together.  Even then he wrote poetry which the literary critics panned.  So he published a satire merely to spite them.” 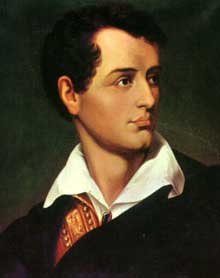 Vivien marvelled at the familiarity with which he spoke of the celebrated poet.  But not so much that she could hide her usual candor.  “It sounds as if he could not bear to have his work criticized.  A dangerous proposition for any artist, I believe.”

“There speaks the sensible Miss Montgomery.  When any other woman would throw herself at Byron’s head.”

George Gordon, Sixth Baron Byron, was the hottie of the period.  Russell, in Notorious Vow, acknowledges this and is rewarded by Vivien’s candor.  She thinks the dramatic sweep of Romanticism that becomes full-blown in the Regency period can be dangerous for its addicts, much like Anne Elliott in Jane Austen’s Persuasion.  Vivien has good reason to believe Lord Northam, who nearly ruined his life when he made a certain notorious vow, resembles the greatly impassioned, and ultimately tragic, Lord Byron.

This particular quote from Chapter Eleven of Austen’s last work sums up the Regency’s craze with romantic poetry rather well:

“he repeated, with such tremulous feeling, the various lines which imaged a broken heart, or a mind destroyed by wretchedness, and looked so entirely as if he meant to be understood, that she ventured to hope he did not always read only poetry, and to say, that she thought it was the misfortune of poetry to be seldom safely enjoyed by those who enjoyed it completely; and that the strong feelings which alone could estimate it truly were the very feelings which ought to taste it but sparingly.”