Halloween approaches and time to revisit the Gothic novel bookshelf.

Examples of the genre on my shelf are mostly from the 1970s. Their covers feature almost identical elements, enhanced to a degree that seems a bit much these days. Perhaps that’s a reminder it’s all too easy to exaggerate what is meant to inspire mystery and a sense of danger.

One too many stormy nights and you risk bringing forth a giggle instead of a gasp.

Thomas Love Peacock (1785 – 1866), Regency-era novelist famous for satire, viewed the Gothic with benevolent amusement. He was a close friend of Percy Bysshe Shelley, that lion of the Romantic movement. Naturally Peacock spent a good deal of time in the poet’s circle, comprised of those heavily concerned with expressing over-wrought feelings and tortured obsessions.

Peacock wrote his 1818 Night Mare Abbey to spoof the efforts of his Romantic friends, albeit in the most amiable way. The story is not frightening in the least, so you can disregard suggestions from internet bots that it is one of the scariest stories of the nineteenth century.

Think of it as the comedic cousin of Northanger Abbey.

The abbey itself is a caricature of the Gothic setting. Servants are deliberately trained to absolute silence, with the most absurd results. Only the sound of the hall clock penetrates, the closing of a distant door resounding throughout the gloomy corridors as if it had been slammed. There is a ruined tower, clad with ivy that rustles in the wind, owls providing ‘the plaintive voices of feathered choristers’ and, of course, the sea pounding against the rocks below.

The Old House, prominent setting of the Gothic TV series Dark Shadows (a scrumptious Halloween treat for me) was the Colonnades, one of many Gilded Age mansions along the Hudson River that have since vanished.

Not surprising, we have warnings of evil afoot, wrapped up in a clever commentary of society and its pleasures. The character Mr. Toobad (perhaps John Frank Newton–who advocated Shelley practice vegetarianism) expresses these while lamenting the goodness and simplicity of the past. Now we are in a time when good wrestles with evil:

“The devil has come among us and has begun by taking possession of all the cleverest fellows.”

Abbey also makes sport with the Gothic reader of Peacock’s day, manifested in Mr. Listless, a fashionable dandy who has a penchant for reading and re-enacting the genre. Like Sir Lumley Skeffington illustrated below, Listless can’t decide if he’s really into the metaphysical or just pretending to be. On the one hand, he solidly declares there’s no such thing as a ghost, and yet admits he’s apt to mistake his dressing-gown for one. 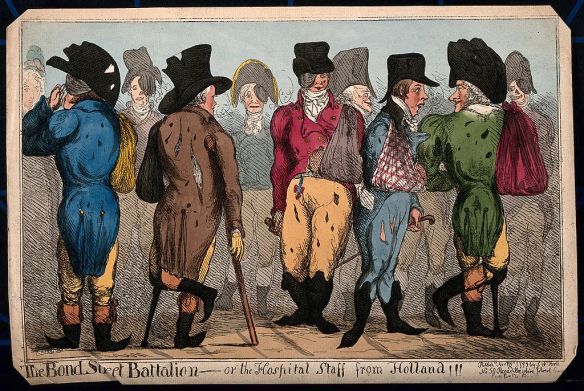 Sir Lumley Skeffington and his band of dandies, affecting melodramatic ‘wounds.’
Image – Wellcome Library no. 10767i

The most powerful element in the Gothic drama, the Byronic hero, receives a masterful treatment in Abbey. He is Scythrope, with an air of appropriately pervasive dissatisfaction. Other characters act as a foil for him, namely the vicar and Scythrope’s love, Marionetta, whose gaiety remains impervious to the melancholic setting and the moody behavior of the hero.

Scythrope’s struggle with deep and dark Disappointment manifests itself in a variety of ridiculous ways. He writes Byzantine essays on mystical subjects. He builds labyrinthine passages in the Abbey that would “defy even the most intrepid of Parisian police.” His un-heroic antics enhance his difficulties. His behavior borders on the anti-social.

Peacock’s spoof of the Gothic reminds his friends not to over-do it. Too much world-weary aloofness can become tedious. More importantly, don’t be Friday-faced. The pain of the past does not excuse unpleasant behavior nor rejection of your family, your friends. Misanthropy, he illustrates, springs from nothing particularly heroic, but from:

“..overweening and mortified vanity, quarreling with the world for not being better treated than it deserves.”

I guess that makes my tortured hero a self-absorbed narcissist.

*Comparisons have been drawn between Abbey and Shelley’s time spent on the Continent with two ladies in his train–Mary Godwin, his new wife, and Claire Clairmont, the comet that disturbs the newlyweds’ orbit. See a previous blog post here for a summary of this amusing junket.

All quotes are taken from the literary criticism of this work of Peacock, published in La Belle Assemblée, Vol. 17 & 18, Jan-Dec 1818.