The word “hoyden” appears in none of Jane Austen’s writings. But we know one in her novels when we see her.

When Lydia Bennett was discovered to have been living in sin with Mr. Wickham, her uncle Mr. Gardiner wrote the following in a letter back to Longbourn in the most ominous tones:

‘She was sure they should be married some time or other, and it did not much signify when.’ — Pride and Prejudice 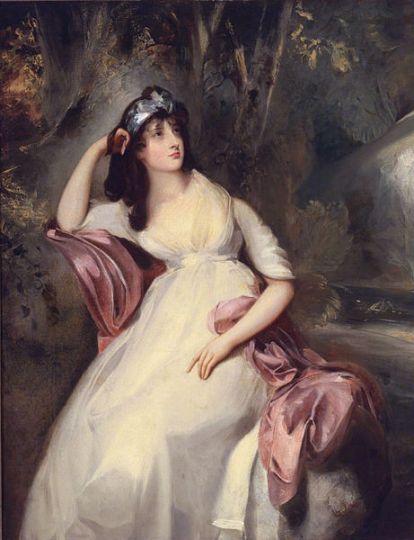 Sally Siddons, a hoyden in some books, by Thomas Lawrence

To make matters worse, Lydia remained entirely immune to Mr. Darcy’s remonstrations. Her behavior, and the reaction of others, make for some of the best commentary on the real Regency hoyden.

The Wickhams’ living together before marriage was not what inspired the most condemnation.  It was the way they, and most particularly Lydia, carried on with complete impunity. She was quite insensible to the notion she ought to be made into an honest woman (a euphemism that ironically denies the true state of affairs–Lydia Bennett is as honest a woman as one might find in the Regency.) And when she is made whole by a wedding brought about by a bribe, she returns to home full of self-satisfaction.

There is plenty of sermonizing. Mr. Collins seems most appalled over Lydia’s lack of humility and remorse. He reserves the worst condemnation for her:

“The death of your daughter would have been a blessing in comparison of this.”

A fitting end to hoydenish behavior.

Austen’s letters reveal still more about the real Regency hoyden. Naughty escapades almost always refer to members of the aristocracy. Her correspondence, like her novels, focus on the fact such characters manage to attend the most exclusive parties even after their debaucheries. Somehow they inveigle invitations to functions as if nothing bad had ever happened.

The notorious Mary-Cassandra Twistleton received special notice in Austen’s 1801 letter to her sister. Amazed that this divorcee should appear in the Upper Rooms at Bath, the author was astonished at how a woman generally acknowledged to have committed adultery might appear unconcerned in company at a select gathering:

“I am very proud to say that I have a very good eye at an Adultress, for tho’ repeatedly assured that another in the same party was the She, I fixed upon the right one from the first.”

In March 1817, she wrote to her niece Fanny, commenting acidly on a recent engagement of a daughter of Lord Paget, divorced from his lady wife some years before:

If I were the Duchess of Richmond, I should be very miserable about my son’s choice. What can be expected from a Paget, from and brought up in the centre of conjugal Infidelity and Divorces?–I will not be interested about Lady Caroline. I abhor all the race of Pagets.

Divorce was not at issue–it was the temerity of the daughter to wed publicly.

21 thoughts on “The Real Regency Hoyden: according to Jane Austen”