In my neighborhood, the residents spend weeks in advance of Halloween erecting elaborate displays at great expense and effort to attract trick-or-treaters. Adjoining neighborhoods grumble that their simple pumpkins and baskets of candy are forsaken, year after year, for elaborate treat dispensing displays, adults in mid-century throwback costumes and a recreational vehicle converted into a walk-thru haunted house.

Two years ago this blog posted a Halloween discourse on the Regency’s rising infatuation with the supernatural. As my last post playfully points out, the popularity of wild, haunted settings in works of early Romantic literature was largely responsible for this trend.

Sir Walter Scott was probably the first well-known writer to tap into the power the untamed, natural setting had on readers at the time:

“….the living I fear not, but I trifle not nor toy with my dead neighbours of the churchyard. I promise you, it requires a good heart to live so near it: worthy Master Holdforth..had a sore fright there the last time he came to visit me..”  — Kenilworth, Sir Walter Scott (1821)

Long before Kenilworth sparked the Regency’s penchant for ghost hunting, there was Scott’s Rokeby. By the time of its publication in 1813, the poet’s work was beginning to pale. The readers of the Regency saw it as an ill-disguised marketing ploy for English country house tourism. Nevertheless, Scott once again turned to setting for inspiration in a work that was highly anticipated, with the potential to topple even Childe Harold.

The titular name of Rokeby comes from a real country house once owned by Regency-era antiquarian J. B. S. Morritt, a particular friend to the Wizard of the North. His Rokeby Park was and remains a perfect gem of Palladian architecture.

Rokeby Park’s neighboring river, The Greta. Another noted Romantic, Coleridge, called it Loud Lamenter for the distinctive sound its waters make running over the rocks. Photo via RokebyPark.com

A dobie, or dobby, is said to walk the ravine of the Greta. Much like a brownie or fairy, this spirit is rooted to the place and yet capable of startling passersby. Some traditions say it is the ghost of a murdered heiress to the nearby peel tower of Mortham, an earlier residence of Rokeby’s builders.

“Others say it was a Lady Rokeby, the wife of the owner who was shot in the walks by robbers, but she certainly became a ghost and under the very poetic nom de guerre of Mortham Dobby, she appeared dressed as a fine lady with a piece of white silk trailing behind her, without a head indeed though no tradition states how she lost so material a member, but with many of its advantages for she had long hair on her shoulders and eyes nose and mouth in her breast.”

Morritt was understandably gratified by the poet’s determination to give his home such splendid notoriety, living as he did in the age of Romanticism. Perhaps he was less gratified  when he discovered Scott looked elsewhere to beef the thing up. 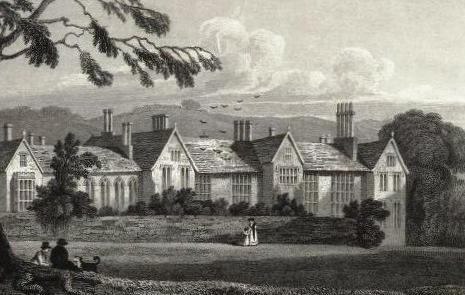 Old Littlecot Park as printed in Views of the Seats of Noblemen, vol. V — by John Neale (1820)

The contributing setting was Littlecote House in Wiltshire, as revealed in Scott’s notes to the fifth canto. Scott visited the Elizabethan house and was struck by a particular bedroom there, whose furnishings were done up in blue, much tattered and worn by the Regency. Its hangings in one place were marred by a hole deliberately made, and clumsily patched again with the cut-out material.

The reason for the patch concerned a midwife during the latter part of Elizabeth I’s reign. She was summoned late in the night (an appropriately stormy one in November), blindfolded, to a location unknown to her. Once her eyes were uncovered, she saw that the bedchamber she’d been brought to was clearly of some wealth and consequence. A masked man of terrifying aspect ordered her to minister to a woman in disguise, giving birth.

In a most horrific act, the man grabbed the newborn baby from the midwife. After several torturous attempts, he finally dispatched it in the room’s blazing fireplace.

Upon her return home, the midwife made a deposition before the local magistrate, ‘strongly agitated by the horrors of the preceding night.’ Blindfolded during departure, she was able to identify the mysterious house of murder by taking away a swatch of the bed hanging.

Such a small piece of setting served to damn a man already consigned to the devil.

He was “Black” Will Durrell, the owner of Littlecote, his activities devoted to amorous and litigious interests. He escaped the gallows by bribing the judge of his case. He couldn’t bribe justice, however. Again it was the story’s setting that served as the instrument of revenge.

Black Will’s own horse threw and killed him, spooked by the dead infant’s ghost.