Lieutenant-General Sir Charles William Doyle (1770 – 1842) was an excellent example of the brave and intrepid British soldier during the Regency period. He rose through the ranks during the Napoleonic Wars to become a heroic commander and Knight Bachelor. 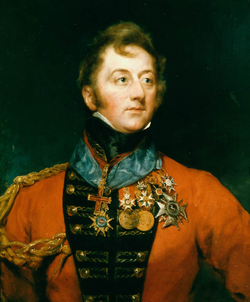 He excelled in restoring order to demoralized troops. He served the Prince Regent as an  aide-de-camp. Two horses were shot out from under him during action in the Peninsular War.

Battle of Alexandria by de Loutherbourg (1801)
Sir Charles was there.

According to a story recounted in The Spirit of the Public Journals by Stephen Jones (1825) —  it was action outside London that nearly laid the hero low–under the generalship of a female, no less.

Sir Charles had just come from a military review held on Hounslow Heath. He had put aside his military garb for civilian clothes to drive back to London. At the village of Brentford, he stopped to allow a line of buggies turning off the road ahead. While he waited, something bumped him in the back. Turning ’round, he was confronted by the two lead horses pulling a post-chaise-and-four. 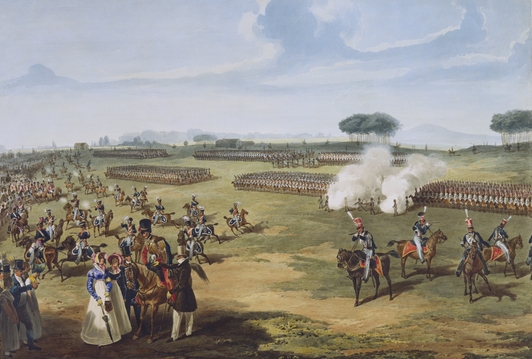 Denis Dighton’s Review at Hounslow Heath via UK Royal Collection Trust
It was the thing to do back then.

He shouted at the post-boy riding one of the leaders, pointing out he couldn’t very well run over the buggy in front of him. The lad’s master, mounted on a wheeler, ignored this and urged the horses forward until they threatened to turn the general’s tilbury over. After much jostling and remonstrations, the post-chaise gave the small carriage the “go-by” and raced away.

Urged by on-lookers to pursue the miscreants, the general drove his horse to overtake them in Hammersmith, where the chaise had stopped to water the horses. When Sir Charles confronted the post-boys, demanding their address, the chaise’s fair passenger appeared at the window, cursing.

“By G___d, they shall neither apologize nor give their address; and if (he) wants any thing else, let him follow me to Curzon-street, and I’ll horsewhip him myself! Drive on, lads!” 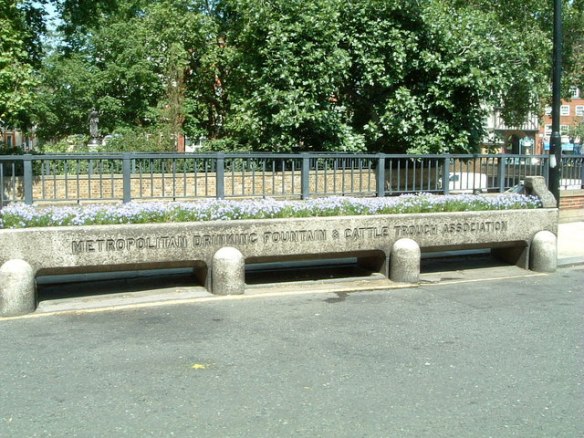 Smithfield in London, witness to many executions, still has its horse trough.
photo via geograph.org.uk – Creative Commons Attribution-ShareAlike 2.0 license.

She ordered the chaise to depart, leaving the general at a stand-still, his horse exhausted and the tilbury a little worse for the wear. A bystander’s horse was pressed into service for Sir Charles to mount and continue the pursuit. He followed the chaise all the way to Hyde Park, but stopped short when the four-in-hand passed through the Kensington Gate at a full gallop.

Sir Charles did not dare follow. Strongly conscious of his dignity and his reputation, he would not allow himself to become a spectacle for the ton’s entertainment.

“He afterwards ascertained that the lady was a Mrs. Stopford, living under the ‘protection’ (!) of somebody or other in Curzon-Street.”

The post-boys were thus identified and brought to justice before the magistrate the next day. As for the courtesan, she was never troubled by prosecution.

That is what it means to live under another’s protection.

One outrider for the Queen – Trooping the Color in 2007
photo via wikicommons Creative Commons Attribution 2.0 Generic