“..for where an ancient baron, holding a baronial estate, that is, a castle or a manor held of the king ‘in capite per baroniam,’ was summoned to Parliament, his title did not arise by writ of summons, but from his barony, and he became a baron by tenure.”

— A Treatise on the Origin and Nature of Dignities, or Titles of Honor; by William Cruise (1823)

So summed up the Duke of Rutland’s opposition to Lady Henry’s desire to be a baroness. He argued their ancestor, Robert de Ros, was summoned by writ to attend the king as baron by virtue of the lands he held. And because those lands could only pass to heirs male, the title was never meant to be held by a mere female.

There can be no Baroness de Ros.

The attorney general, Sir Arthur Piggot, was the Crown’s representative in the matter. He determined the facts of the case, which were thus:

It was for the Committee of Privileges in the House of Lords to decide if Lady Henry’s petition had any merit.  Had she made out a valid claim to the ancient barony by proving it was created by writ alone, and not by tenure of lands? 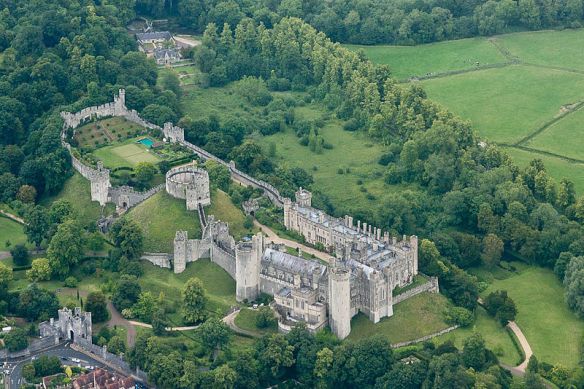 Arundel Castle, home of “the chief actors in some of the most gloriously memorable scenes of British history.“

Her lawyer, Mr. Adam, reasoned that if the Crown had meant to make a baron by virtue of his property, why didn’t the writ summoning him mention them? He acknowledged there were cases of tenured barons who were summoned to parliament without mention of their lands, but these were the exception to the rule, the most famous example being Arundel, an ancient title that passes by virtue of whomever holds the castle of that name.

Just being keeper of the castle does not make one a parliamentarian.  In this, the House of Lords agreed, as Cruise reports:

Mary Frances Dawson, Countess of Dartrey, 24th Baroness de Ros — her death led to another abeyance, as her issue were daughters.

Lady Henry had not won her title just yet. She must contend for it among the other heirs of the last true baron de Ros, her grandfather John, 4th Duke of Rutland. He left two daughters, Lady Frances Willoughby and Lady Bridget Tyrwhitt, as his co-heiresses. Neither has precedence over the other, each sharing equally in what cannot be halved.

The result–the title is in abeyance. Lady Henry and George, Earl of Essex, descended from one daughter and Sir Thomas Windsor Hunloke, the other, all had equal claim to the Barony of Ros.  And no one of them had greater claim than the others.

Enter the Crown, the “fount of all honors.”

Before the events told in Notorious Match, Lord Griffin Montgomery was forced to sell his Welsh estate that had been bestowed on his family by the Conqueror.  William I rewarded Roger de Montgomerie, Griffin’s Norman ancestor, with the marcher earldom of Shrewsbury along with Tremont and other estates throughout western England and Wales.

Earl Roger’s sons spent a good deal of time fighting the Welsh.  One had succumbed to an attack of Viking pirates on the shore not far from Tremont.  In my story, an estate was established there by a cadet branch of the Montgomery family.  The nearest town is Machynlleth, a real place referred to locally as “Mach” and where one can view fighter jets careening through the Welsh hills as they perform the Mach Loop here.

Griffin’s grandfather, Baron Montgomery, was the last of the family to reside at the estate when he died in 1814.

A year later, Diana, the Countess of Northam, proposed buying it back.

Griffin pivoted to face her.  “Buy Tremont?  Why the devil would you do that?”

Diana raised her eyebrows, clearly puzzled.  “If it’s your pride at issue, I won’t give you the money.  I’ll have the lawyers get it back.  There’s probably some contingency they can find, some forgotten entail or other legal condition that defeats the conveyance.  Most estates have them, to prevent such a sale in the first place.”

The enormity of what she proposed, that any resource be spent on the very place he associated with his iniquity, stunned and upset him.  He tried to restrain those feelings only for them to manifest in his jaw, which ached from being clenched.

“You’ll do no such thing,” he retorted, his voice harsh.

Diana visibly recoiled, the hurt he had dealt her impossible to take back.

Griffin’s Tremont is an Elizabethan prodigy house. Its exterior reminds me of Hardwick Hall, which has an abundance of windows characteristic of the prodigy’s so-called Lantern style. At night, with candles and torches blazing, the great wall of windows would be lit up like lanterns, hence the name. Another house featuring this extravagant style is my favorite, Montacute House, pictured above. You may remember it from 1995 movie adaptation of Jane Austen’s Sense and Sensibility, the house where Marianne fell ill.

Tremont’s interior, however, is based upon the remarkable Cassiobury Park, ancient seat of the Earls of Essex.  It was extensively rebuilt by the first Earl of Essex in the seventeenth century in honor of the restoration of Charles II.  He hired Hugh May, one of the commissioners for the rebuilding of London after the Great Fire, to extend the house and fit it up on the inside for an expected visit by His Majesty.  The visit never came, but the expectation was glorious, nevertheless.

May hired the master carver Grinling Gibbons, a Dutch Quaker who was executing the Baroque style in intricate wood carvings that can be seen in Hampton Court, Blenheim and St. Paul’s Cathedral.  He carved many of the fittings at Cassiobury, such as overmantels, cornices, moldings.  It was thought that the main staircase was also his work, and like Cassiobury, Tremont has a magnificent central staircase that is a great, rolling thing of exceptional beauty containing intricate scrollwork that defies modern craftsmanship.

Cassiobury Park was doomed as the twentieth century began.  The 7th Earl of Essex died after being run over by a taxi.  The 8th Earl put the house up for sale since the nearby manufacturing center of Watford was expanding and the parkland of Cassiobury was needed for the “natural” expansion of the town.  All of the fittings, including the carvings, were stripped from the house and sold at auction.  Cassiobury Park was demolished in 1927.

The carved staircase was purchased by the Metropolitan Museum of Art and on display today in gallery 518.  There it was discovered the carvings were more likely attributed to Edward Pearce, an English carver with a name rather less dramatic than Grinling Gibbons, but just as talented.  Additional images of this masterpiece are available at the museum’s website here.

Oddly, the present heir-presumptive to the earldom of Essex is a retired grocery clerk in Yuba City, California.