Like La Belle Assemblée , Ackermann’s Repository had its own resident “Dear Abby.” Letters from Readers addressed to the Female Tattler poured forth troubles seeking advice, and sometimes advice seeking trouble.

These columns  are little vignettes of Regency life.

Humphrey Sneak’s letter to “Madam” appears in the January, 1818 issue. His trouble was his wife, to whom he had been married not above three years. A termagant, she had plenty of practice at being a shrew; she being, by her own account, forty-two years of age since the year 1804.

To begin with, her voice is shrill, and echoes throughout, notwithstanding her husband’s pleas to let their domicile be as silent at noon as it is at midnight.

She is a know-it-all–only her opinion is right, and everyone else’s, most particularly her husband’s, is wrong.

She is continually dissatisfied with the maidservants. Invariably the last one hired is always the worst she’s ever seen. As a consequence, she runs through as many as a couple of dozen a year:

“Indeed, to say the truth, very few of them stay to be discharged, for she does so tease, harass and abuse them, that they generally discharge themselves.

The one maid that did stay on (upwards of seven months) was hard of hearing. When she recovered this faculty, she left after seven days.

As for the neighbors, they “return the compliment” when she is rude to them, and avoid her company entirely. She complains she has “no society abroad.” Even worse, she has no companionship at home, for her husband is so ill-natured as to point out she has only herself to blame.

For solace in this marital tumult, he thinks of two possibilities. One is the notion that his wife might someday break a vital artery in one of her “violent passions.”

The other is suicide:

“..hang myself on the lamp-iron in the hall, and present myself to her some morning as she comes downstairs to breakfast, dangling at the end of a rope, and freed from all my present miseries.”

He concludes his letter to the Female Tattler in some haste, for he hears the termagant now–“coming down the stairs (!)” 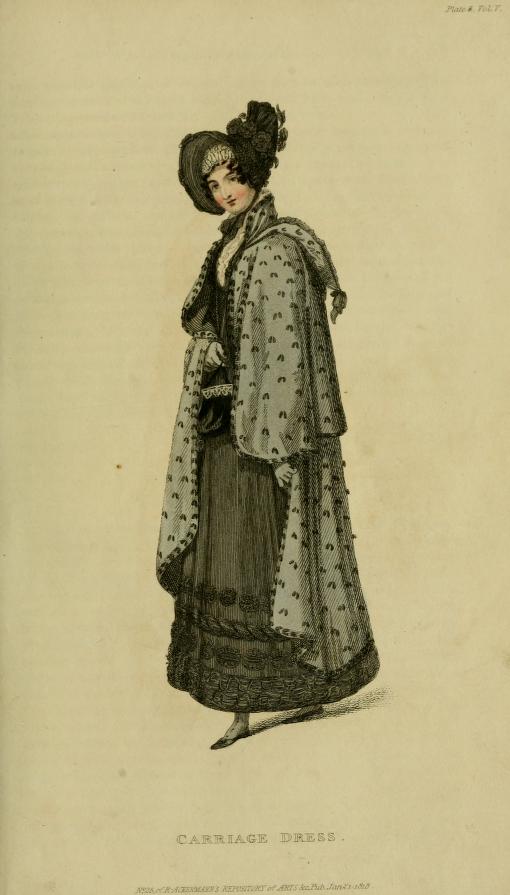 This carriage dress, courtesy of Miss McDonald, no. 84 Wells-street, is made of bombazine. The wrapping-cloak is Russian “novel and striking.” The little purse, called a ridicule, is of black velvet.