The layers of history in an old place like London continually fascinate me.  The city is like an ancient mansion that’s been made over by successive generations to suit changing tastes in fashion and function.  New wallpaper is placed over the old, new paint is slathered over faded oak.  When these layers are peeled back, we see something completely different, in the same place.  And it never fails to amaze. 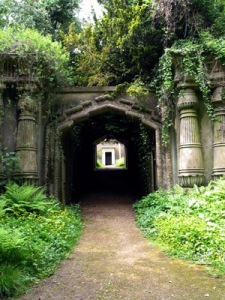 Fitzmaurice Place is a small street leaves the southeast corner of Berkeley Square and runs into Curzon Street, just where the old core of Lansdowne House sits.  Across from its truncated facade is a pedestrian walkway lined with shops that leaves the house and ends up at Hay Hill on the other side.   It is called Lansdowne Row.

In the days of the Regency, this was a narrow walkway sunken between forbidding walls.  Walls so tall that they permanently darkened this shortcut linking the two ends of Mayfair.  You couldn’t see what was on the other side of either wall, nor were you meant to.

There are very few good photographs of the passage.  I used this image of the Egyptian Avenue monument from London’s Highgate cemetery.  It looks imposing–and a little spooky.

At Lansdowne Passage, in the middle of the most fashionable part of Regency London, two great estates–two great families–came together in a physical way.  As mentioned in an earlier post of the series, Lansdowne House was built in such a way as to give Devonshire House an unobstructed view toward Berkeley Square.  The two houses had enormous gardens.  They abutted one another yet gave way to that ancient right of passersby–an easement, if you will, called the right of way.  This came to be known as Lansdowne Passage, appearing much like a crevasse when Diana, sometimes called Viscountess Northam, climbed the ladder of the Lansdowne House garden to remonstrate with the Viscount Hartington, heir to His Grace, the Duke of Devonshire, who stood on his garden ladder opposite.

Many legends abound of the walkway, mostly because its long length was hidden from observation and provided a perfect route for robbers and ladies of the night.  Indeed, Hay Hill at one end of the passage was long a favorite of highwaymen.  Even the Prince Regent was robbed there at gunpoint, along with his brother, the Duke of York, of the three shillings they had between them.

A highwayman once urged his steed down into the deep passageway to escape apprehension, goading his horse to leap across the descending stairs, landing heavily on the paved stones below.  They were now in a narrow passageway, mind you, and the rider must needs take the reins in one hand and grip the cantle behind him with the other so as to reduce the width of his profile, spurring into the darkness lit only by a full moon riding the sky above.  Then there was the ascending stair opposite.  Even the most intrepid horse must pause, his ears pricked forward, throwing his head down to eye the obstacle ahead.  But alack!  Pursuers are even now approaching–their cries funnelled between haughty walls to spur even a spooked animal to leap upwards, scrambling and skidding for purchase on stone steps to Hay Hill above and the wilds of undeveloped London beyond.

Iron bars were erected to prevent this sort of thing from happening again.

Today, Lansdowne Row is listed as one of London’s haunted places.  Spectres of highwaymen, footpads and the Loquacious Lady still wander the passage, lit by the storefronts of Hugo Morelli and Starbucks.

19 thoughts on “The Ghosts of Lansdowne Passage”