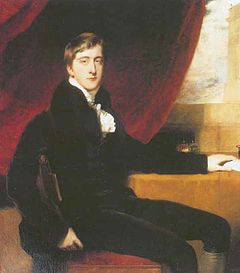 the Marquess of Hartington

Russell drove his tilbury at a rapid pace towards Berkeley Square.  His niece, Diana, fidgeted beside him.

“Dash it, darling, what the devil is the matter?”

She tossed her fire-blond hair, so like his and leaned out of the sporting carriage to catch the breeze like a hoyden.  “I hate London.”

“We’ve only just arrived,” he pointed out.  “I’m persuaded you will like this party we are going to.  Lansdowne House affairs are really quite the thing.  Besides, you probably know some of the girls from that school of yours who might be in attendance there.  Lady Louisa, for instance.  It is said she might get an offer from Lord Henry Petty, heir to Lansdowne.”

“Louisa is a bore,” Diana declared, pulling herself back in the tilbury with a sigh.  “There is a girl from school I should like to see–but she lives in Knightsbridge.”

The Marquess of Wimberley wisely restrained himself from responding.  It would be just like Diana to tease him, pretending she would rather befriend some merchant’s daughter from the City instead of an earl’s daughter.

The tilbury paused at a set of dark doors set in a high wall that ranged the entire length of Berkeley Square’s south side.  A porter emerged from an ivy-covered lodge set in the wall.  He bowed and opened the entrance so his lordship’s carriage could pass through.  Once inside, it was as if they had stepped into the countryside, although they were in the middle of London.  The sounds of traffic diminished to merely hoofbeats on a well-kept gravel drive. The fresh green lawn was so very nearly perfect it might have been brought up from the riverside moments before. Tall oaks towered over them, old enough to have been present when nearby Hay Hill was still a farm in Queen Anne’s day.

Solemn footmen with real powdered wigs appeared before the stately home’s portico to escort the pair inside.  Soon, Diana found herself in the company of the very girl her uncle desired her to accompany.

Diana shrugged, gazing up at the exquisite ceiling of the Adam drawing room.  “Dashed if I know.  Shall we take a turn on the grounds?”

Shortly thereafter they were walking toward an ancient wall, the boundary of the Lansdowne garden.  There was a small ladder placed against it.

“What’s on the other side, I wonder?”

“Oh,” Louisa answered, in her diffident way, “‘Tis His Grace of Devonshire’s garden.”

Diana immediately went to the ladder and began to climb, taking care not to let her slippers get scuffed on the wooden rungs.  She ignored the remonstrations of her missish companion.

“I should like to see His Grace’s garden,” Diana declared.  “One can never tell what a duke’s cabbage looks like.”

Diana reached the top of the ladder.  Below her was a narrow, dark passage that opened below her like a crevasse.  Without warning, another person peered at her–from an opposing wall scarcely feet away, all ears and a wide grin.

“How did you get up there?” she demanded.

“Well, then,” he replied, triumphant.  “I’m Marquess of Hartington.  But you may call me Hart.”

“I shan’t call you anything,” Diana retorted.  “Because we have not been properly introduced.”

“Tell your uncle you’ve met the heir to the Duke of Devonshire and I’ll wager he’ll tell you we’re intimates.”

There’s not much more one can say about the Lansdowne House gardens.  The description of its environs came from Nash’s Pall Mall Magazine, Volume 31 by Ernest Jessop, published in 1903.  By then the massive area in front of the house had become rarified real estate in the middle of London and valued at a price that would just about cover a marquisate’s death duties–taxes that were the scourge of great houses in the early twentieth century.

The new death taxes were to become, as Giles Worsley titled his first chapter in England’s Lost Houses, a Gathering Storm.