Henry Luttrell (1765 – 1851) was the illegitimate son of the earl of Carhampton.  As if that were not bad enough, he had little funds and showed even less promise as an Irish politician.  But in Lansdowne House “he set the table at a roar” and became the “great London wit,” as Sir Walter Scott dubbed him, of the Regency. 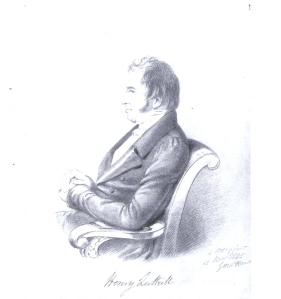 “I know of no more agreeable member of society than Mr. Luttrell.  His conversation, like a limpid stream, flows smoothly and brightly along, revealing the depths beneath the surface, now sparkling over the object it discloses or reflecting those by which it glides.  He never talks for talk’s sake.  The conversation of Mr. Luttrell makes me think, while that of many others only amuses me.”  — Lady Blessington

“Full of well-bred facetiousness and a sparkle of the first water.”  — Tom Moore

“The best sayer of good things, and the most epigrammatic conversationist I ever met.” — Byron

His poetry was equally admired.  His Advice to Julia (1820) was more than just “Letters of a Dandy to a Dolly,” this poem made him a “wit among lords and a lord among wits.”  It also contained some rather good advice to a young lady and how she should treat her lover, couched in a popular discourse on fashionable society during the Regency.   In one amusing anecdote, Luttrell tells of a hopeful applicant to Almack’s.  Evidently the young lady, “a stranger to London” sent her portrait to the Patronesses, along with a letter requesting a subscription.

“But Beauty itself is seldom current in high life without the stamp of Fashion; and the device, though ingenious, was not successful.”

Sadly, no one remembers Luttrell, unless one comes across his name, which one frequently does, in the memoirs of Byron, the diaries of Moore and echoed in the halls of Lansdowne House.