Queen Mary (1867-1953), grandmother of HM Queen Elizabeth II, was a noted collector of art and decorative objects. The Royal Collection owes its comprehensive and thoroughly organized condition to her efforts. She not only focused on fetching back historical items significant to the royal family, she meticulously labeled and catalogued the whole lot.

Her labels are still in use.

Since the Prince Regent himself was a connoisseur, he acquired many decorative objects. His taste was the gold-standard for what was fashionable during the period that bears his name. Thanks to Queen Mary’s acquisitions on behalf of the Crown, we can view some of the finest of Regency-era artifacts today–online, even.

The examples I’ve noted below were all Christmas gifts of the Royal Family.

A vinaigrette from the Regency era would have contained smelling salts or vinegar. Dowager Lady Ingham resorted to hers throughout Georgette Heyer’s novel, Sylvester, or the Wicked Uncle. It was usually supplied by Mucker, her ‘grim handmaiden,’ especially after Phoebe scandalized the ton when she left the Duke of Salford ‘ridiculously alone’ on the dance floor, ‘white with fury.’

The Royal Collection has the one pictured below. Its description reads: “A silver-gilt vinaigrette in the form of the Imperial State crown; the gilt interior with a hinged grille pierced and chased with a basket of flowers. Suspension loop.” Queen Mary received this vinaigrette at Christmas from her Lady of the Bedchamber, Lady Eva Dugdale. Her ladyship was accounted to be the queen’s closest friend and confidante.

This Wedgewood scent bottle — circa 1810 — shows the staying power of the classical motif in Georgian decorative arts. Made of blue stoneware, it has a white relief depicting Pysche. The Royal Collection categorizes it as Etrurian, a stylistic method that is found in Regency-era interior design–from furniture and wall coverings to figures of birds and sphinxes. Robert Adam used the Etruscan style in his designs for the third drawing room of the now-demolished Derby House in London’s Grosvenor Square, favoring shades of Pompeian red and terracotta, with black accents.

Actually, the ancient artifacts found in Etruria weren’t Etruscan at all–they were Greek.

Snuff boxes were the very stuff of a man’s life during the Regency. Beau Brummel made snuff-taking fashionable. The Prince Regent had his own blends of snuff. Handling it properly it was a mark of good ton. Sharing your snuff with another indicated a very close friendship. Edward VII gave the bloodstone snuff box below to his daughter-in-law when Queen Mary was Princess of Wales. They called her “May” in those days.

Of all the gemstones, bloodstone was considered the most masculine.

This beautiful 1816 gold snuff box contains a miniature painting of Mary, Duchess of Gloucester, the last-surviving child of George III. The intriguing, repetitive pattern on the lid is created by an engraving technique called engine-turning, or Guilloché. It’s a process similar to using a spirograph.

Jubilee – derived from the Latin verb iūbilō, “shout for joy”

The last Jubilee celebrated by a monarch other than Her Majesty was that of her grandfather, George V.  This is fitting.  She has always followed in her grandpa’s footsteps.

She perched on a little chair between the King and me, and the King gave her biscuits to eat and to feed his little dog with, the King chortling with little jokes with her–she just struggling with a few words, ‘Grandpa’ and ‘Granny’ and to everyone’s amusement had just achieved addressing the very grand-looking Countess of Airlie as ‘Airlie.’  After a game of bricks on the floor with the young equerry Lord Claud Hamilton, she was fetched by her nurse, and made a perfectly sweet little curtsey to the King and Queen and then to the company as she departed.

There is no one here at all except the family, the household and Princess Elizabeth–aged 2.  The latter is a character.  She has an air of authority and reflectiveness astonishing in an infant.

Those were the thirties.  Grim years of Depression and a war looming over a country exhausted and heartbroken after the last.  George V had not been popular in the first years of his reign because he lacked the flash and warmth of his father, Edward VII.  During the Great War he kept to a behind-the-scenes role, conscious of other monarchies falling all around him.  He was also mindful of Britain’s rising republicanism and felt he must persuade his government to deny asylum to his own cousin, the Tsar of Russia.

He never aimed to be popular.  When the wind blew the other way, he kept to his convictions that would never sacrificed for “good press.” He even rebuffed his son, the man who could not rule without the woman he loved, for prosing on about giving great press.

“I do things because they are my duty, not as propaganda.”

He was a Sailor King like William IV, another monarch doomed to follow a predecessor (George IV) given to indulge in self-acclaimed brilliance.  He was frugal, modernizing his father’s Britannia for a second racing career even as the yachtsmen of England urged the king to have the 1892 boat replaced.  He refused and kept the vessel throughout his reign.

In personal matters, he was even less like his popular father.  Edward VII eschewed the bed of Alexandra, Europe’s loveliest princess, for that of another woman.  George V remained devoted throughout his life to the redoubtable Queen Mary (who will someday receive the richly-deserved devotion of several posts on this blog):

“I can never sufficiently express my deep gratitude to you, darling May, for the way you have helped and stood by me in these difficult times.  This is not sentimental rubish, but what I really feel.”

On the sixth of May in 1935, George V celebrated his Silver Jubilee, astonished at how many people were lining the streets.  But none of this went to his head, as he indicated upon leaving St. Paul’s after the service of Thanksgiving.

“The Queen and I are most grateful.  Just one thing wrong with it–too many parsons getting in the way.  I didn’t know there were so many damn parsons in England.  It was worse than a levee.”

Duty renews us all, year after year.  It binds us to the past so that we can live in the future.  I suppose that is why the Lebowitz portrait of Her Majesty is so apposite of the Reign, funereal in its depiction of an order that is everlasting. 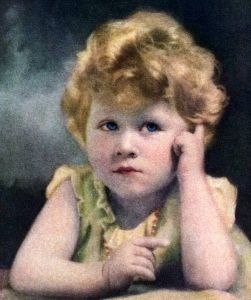 When George V died, Britannia was towed into deep water south of the Isle of Wight and sunk.