People have not done talking of the squeeze at Gloucester House, which was a most exact and daughter-like copy of the Drawing-room, both in numbers and quality.” 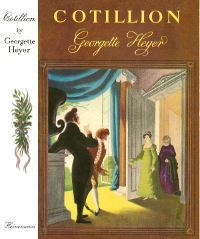 Freddy: “Much of a squeeze?”
Willis: “No, Sir, we are a little thin of company, the season having just begun.”

A squeeze, as you know, is cant for a large number of persons crammed into a space too small to accommodate them.

Purchased in 1806 by the 2nd Earl Grosvenor, Gloucester House became Grosvenor House, the new London residence of this vastly wealthy family. The squeeze Lady W.W. wrote of took place in the house as it was being enlarged and redecorated.

That evening, guests were ascending the great marble steps to the assembly rooms above, when:

“Mrs. Ross took a faint upon the stair-case, and in order to give her room and air, an Alarm was given that the whole was giving way..”

The panic that ensued was tremendous. Since renovations had been ongoing at the mansion, it must have seemed likely that the structure, including the staircase, had been weakened in some way:

“..this sent every body flying, or rather pushing one over the other..”

The Duke of Wellington was also on the stairs when Mrs. Ross fainted.  I suspect she was the lady whom His Grace once called, “my friend Mrs. Ross,” and the wife of one of his officers Colonel (later Sir) Patrick Ross, of the 75th Regiment.

She was usually very obliging. At Wellington’s request, she kept an eye on a colleague’s adventurous son while all were abroad during the Napoleonic Wars.

Friend or otherwise, in the end she caused so much panic that the great Field Marshal was moved to declare:

“..he was never so much frightened in his life, and that it was too bad after all to come here to be taken in by a ‘ruse de guerre’ and that from Mrs. Ross!”