On the outskirts of London, at the edge of Epping Forest, lies the site of old Wanstead Manor, which belonged to Elizabeth I’s favorite Robert Dudley and, in turn, his stepson, the Earl of Essex. A century later, Sir Richard Child, Earl Tilney built what was called the ‘noblest’ Palladian mansion there. Its magnificence entertained the Prince Regent, provided a fitting temporary residence for the refugee Bourbons and served as a backdrop for epic celebrations of Wellington’s victory over Napoleon.

Wanstead House was the crown jewel of a Regency heiress’ fortune.

The east front of Wentworth Woodhouse resembles Wanstead, minus the Baroque ornaments. Ironically, at one time the parkland of this house was made the largest open pit mine in post-war Britain. Photo by Dave Pickersgill — via geograph.org.uk

Catherine Tylney Long was the ‘Wiltshire heiress’ in possession of Wanstead House. Against the advice of her relations and his, she married the notable rake William Wellesley-Pole, a nephew of Wellington.

The progress of their courtship and disastrous marriage has been well-documented–a perfectly cautionary tale against reforming the spendthrift libertine. As for the marital abode, Wanstead House, its demolition and dispersal makes an informative study of Regency-era creative financing. Wellington tried to save the estate for the unfortunate offspring of the ill-fated match–a mighty effort that kept the Court in Chancery as busy as the one portrayed in Dickens’ Bleak House.

What remains of Wanstead House is the beautiful park containing the ornamental waters once connected by picturesque bridges, the Temple and the Grotto, and surviving portions of tree-lined avenues.

Author John Harris, “No Voice From the Hall” recollected that only pits from the Wanstead House cellars remained. This is the ruined grotto on the grounds.

The best remnants of Wanstead, however, were sold in a famous 32-day sale the rake held of his wife’s belongings. These heirlooms are still selling today in the most exclusive auctions in the world, giving a glimpse of the fine objects that once adorned the great Regency-era houses. 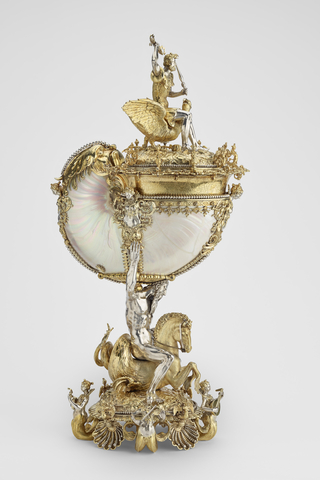 via the Royal Collection Trust, the Nautilus Cup was purchased at the Wanstead Sale by George IV

1 thought on “The Rake and a Regency House Remnant”