On the eve of the Regency, Miss Eliza Farren was accounted one of the finest actresses of her day. From her first role as Miss Hardcastle in She Stoops to Conquer, to her appearance as Nimeney Pimeney in The Heiress, her skill at playing a variety of characters was like Sir Thomas Lawrence’s in painting them. 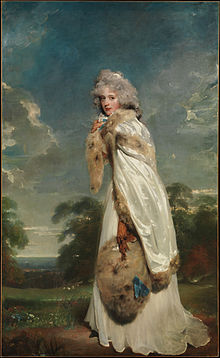 “Miss Farren, with her fine-lady airs and graces, with that elegant turn of her head and motion of her fan and tripping of her tongue.” — Hazlitt

Around 1790, he painted her portrait, wrapping her elegant figure, tall and slim, in a fur trimmed “john-coat.” Some critics disapproved of this raiment, so at odds with the subject’s summery surroundings. Comments such as these did not concern Sir Thomas. After all, he was the artist.

When the portrait was presented to the Royal Academy, simply entitled “The Actress,” Sir Thomas was roundly attacked for addressing the glorious Miss Farren as a mere hireling on the stage. This criticism needled him, for it was not his art that was at fault, but his taste!

He wrote at once to Miss Farren, knowing one word from her would dispel any criticism by her beloved fans. He apologized for the clumsy way he meant to convey his own admiration for her art, which sprang

“..from the wish that he had that it should be known to be her from the likeness alone, unaided by professional character.”

Two years later, the unsold portrait and its subject had caught the eye of Lord Derby. Edward Smith-Stanley, 12th Earl of Derby, was still married to his first wife, but they were separated on account of her affair with the Duke of Dorset. His lordship, through the offices of Miss Farren, offered to buy the painting.

Sir Thomas informed Miss Farren he was willing to sell it, but the price for her portrait was now one-hundred and twenty guineas. She wrote back, expressing her astonishment and chastising him for having forgotten the original quote of sixty guineas. In the end, the besotted Lord Derby possessed himself of the portrait, if not the sitter, for a princely sum of one hundred guineas.

Unfortunately, the picture continued to plague Sir Thomas even after it was delivered. Apologizing for being so “troublesome,” Miss Farren wrote to him of additional criticisms, and would he pretty please alter the picture? 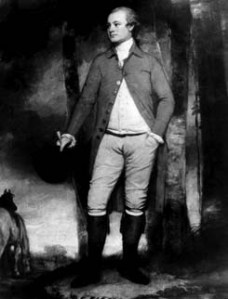 From this angle, Derby looks a bit like Downton, I daresay.

“One says it is so thin in the figure, that you might blow it away–another that it looks broke off in the middle: in short, you must make it a little fatter, at all events, diminish the bend you are so attached to, even if it makes the picture look ill; for the owner of it is quite distressed about it at present.”

We don’t know if Sir Thomas complied, but in 1797, Miss Farren married her earl, and

“exchanged the tinsel crown of the stage for the very substantial coronet of a countess.”

1 thought on “Portrait of the Regency: Vanity and Good Taste”