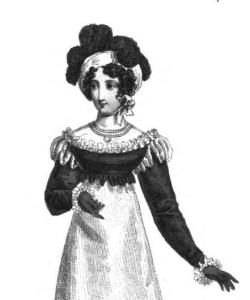 The canezou is a type of spenser–this one is in black satin and part of a “fancy mourning dinner dress.” From the December issue of La Belle Assemblée, 1818.

“You read in the papers, no doubt, the wedding of the dashing Adelaide Worthington, with the Hon. Frederic Cleveland..”

Having left the out-of-the-way society of her “good aunt Charlton,” Adelaide went to live with another aunt, as dashing as the former was dull. Lady Worthington was the sister-in-law of the gel’s father, and had a daughter of her own, “lovely and gentle.” Under the aegis of Lady Worthington, Adelaide soon received a very eligible offer of marriage.

Maria tells her sister that she’d been compelled to attend the wedding as Adelaide’s “bridewoman,” a duty that filled her with dread:

“I know you are eager to learn how we were attired on the wedding-day: we were dreadfully troubled to make the bride-elect attend to reason; it was so horrid vulgar to be dressed in white at a wedding.”

Maria’s husband, Mr. Fitzosborn, was lucky enough to escape having to wear white. Instead, he wore a finely tailored coat in a grey-green sage color, his only nod to the bridal request to wear white being found in his waistcoat and silk stockings. He looked so well that many mistook him for the bridegroom.

As for the bridegroom himself, he seemed appeared in a rather odd choice for nuptial dress:

“..an American drab-coloured coat, with large and loose white trousers.” 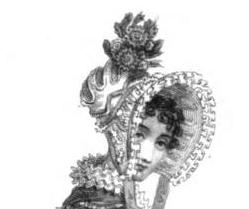 Here is a transparent bonnet of white net and lilac satin, “crowned with a bouquet of French double poppies.” La Belle Assemblée, June 1818

Meanwhile, Adelaide, at her husband’s insistence, wore a French gown of the finest white Brussels lace over white Chinese silk. Her aunt protested that if Adelaide must wear white, at least let it be English white, but to no avail. Maria indicates this unfortunate choice of white over white might have been relieved by the canezou of satin the bride wore over her gown, although this seems unlikely as it too was in “vulgar” white. The bridal bonnet was transparent and trimmed in fine French blond with a large plume of feathers:

“It did not become her, but it was fashionable.”

In a grand departure worthy of Ianthe, that remarkably spoilt, impulsive character in Georgette Heyer’s Sylvester, Adelaide embarked on her wedding trip to the bridegroom’s country estate wearing a “celestial blue” pelisse of sarsnet. It was a pity the bride chose, as was her lamentable habit, a bonnet which quite hid her face–a Leghorn of immense proportions.

1 thought on “Adelaide — A Regency Wedding”