The real Regency rake poses a problem not only to himself but to the woman who thinks to conquer him.

Regency scholars were amazed at the reports brought back to them of Egyptian antiquities, particularly fascinated with the way women were depicted in mythology. Hathor, queen of heaven and perhaps a bastardization of the imported cult of Aphrodite/Diana, was discovered on many a priestess tombstone standing upon a lion. Gentlemen who studied the classics surmised that this motif was love was conquering the beast.

Whether such a miracle can be wrought (on a permanent basis) has yet to be proved.

John Mytton had been married before–to Harriet Emma–but she died in 1820 after two years of marriage.

Nimrod (Charles James Apperly) remembers counselling the mother of Mytton’s second wife. Her daughter Caroline was the issue of the late Earl Courtney of Powderham Castle in Devon. When her daughter was seventeen years of age, she approached Mytton’s close friend for advice and received this ambivalent response:

“In my opinion, Lady Charlotte, Mr. Mytton has no business with a wife at all; but should he marry your daughter, Caroline, there is a greater prospect of his making a good husband to her, than to any other woman in the world.”

Isn’t that always the case? You alone have the best chance, but beware–the man has no business with a wife at all.

Caroline bore Mytton five children after marrying him in 1821. She saw him throw their babies up in the air and pelt them with oranges. That was more than enough. She ran away from him in 1830. 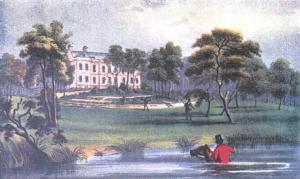 “Darling, must you get your knickers wet?”

18 thoughts on “The Real Regency Rake: A Good Husband?”