In 1805, Gloucester House, home of several lesser Royals, was purchased by the Grosvenor family. The house had a long frontage along Park Lane and extensive gardens beside Mount Street. The noted architect William Pordon was hired to remodel it. Upon initial inspection, he found it to be “dirty..and not so cheerful as the situation would lead one to expect.”

In 1808, Grosvenor House, as it was renamed, was thrown open for the ton’s inspection. Lord Lonsdale, Lord Grosvenor’s fellow Tory, pronounced it “expensively furnished, but in bad taste.”

No matter–Grosvenor House was principally known for its collection of paintings. Stubbs, Gainsborough, Benjamin West were just a few of the artists represented in a collection that required extensive additions to the House. An entire wing some fifty feet long, double story, was added. An entire room was devoted to the religious paintings by Rubens, looted by the French from a Carmelite convent during the Spanish Peninsular War. These were purchased for 10,000 pounds. Presumably the nuns saw none of that money.

The development of the Grosvenor Estate, of which the house was only a small part, made the family one of the wealthiest in England during the Regency. Successive generations became wealthier, eventually becoming the Marquesses and later Dukes of Westminster.  The present duke is almost (if he isn’t) the wealthiest person in the U.K.

The Viscount Belgrave, Richard Grosvenor, and his wife, Lady Elizabeth Leveson-Gower, as she was known before her marriage, lived in Grosvenor House during the London Season with his parents, the first Marquess and Marchioness of Westminster.

I’ve pictured them here because they are both rather good-looking.

Lady Elizabeth published two very interesting travel diaries. During her trip to Russia in 1827 her knee suddenly swelled. An English doctor was found, along with eight leeches:

“…more voracious animals never were seen. I could hardly prevent them from biting my fingers in taking them out of their glass; and they fixed the moment they were applied; biting like pen-knives, we put on seven, and never saw anything like their size, and the quantity of blood they took away..” 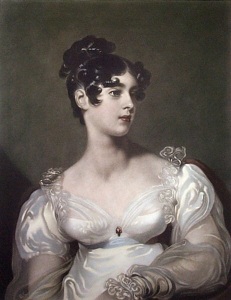 Elizabeth Grosvenor, Marchioness of Westminster
no leeches in this 1816 portrait