In 1874 Macmillan & Col published a leather=bound set of memoirs on Holland House.  The author was the Princess Marie Leichtenstein. 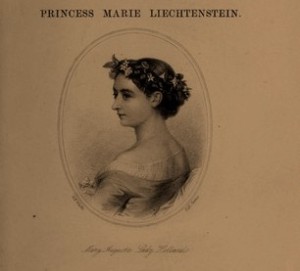 “As it was, we must think its publication a mistake….It is impossible to say what is the central figure in it.  Holland House, Charles James Fox, the mutability of human fortune, Napoleon’s snuff-box, or the knights who dined round Holland House’s table.”–The North American Review, 1874Well, what can you expect from an American critic?Her Highness was brought up in Holland House when the 4th Baron Holland and his wife, Lady Mary Coventry, were in residence.  Lord Holland was the last of his line and the couple had no children.  They adopted a little girl and she was christened Marie “Mary” Henriette Adelaide Fox.  She was thought to be Lord Holland’s illegitimate daughter by another woman, but this circumstance seems to have posed no impediment.  After all, she married a prince.

“When ladies get hold of a little learning, they experience no sense of danger.” — Sketches (Holland House) by Abraham Hayward

Oh!  What an odious thing to say.

Despite these naysayers, Her Highness’ biography of Holland House was well-received.  By reason of her ties to the family, she had access to Holland House’s records which she used to bring it back to life long after its heyday during the Regency:

On her grandmother, the indomitable Lady Elizabeth Holland:

“..while he enjoyed and preferred the society of choice spirits, while with him absence could not extinguish friendship, his benevolence and courtesy made him extend a kind reception to all who came to Holland House.”

And others, famous and in many cases, foreign:

“Talleyrand, the diplomatic wit and witty diplomatist, who cared not which party he supported, provided it was the stronger.”

“Whishaw (the Pope of Holland House), whose sense made his opinions valuable to have and difficult to obtain.”

We are lucky even princesses were moved to record the past.  Places like Holland House tended to be done away with in rapidly developing, expanding London.  And the old house had reason to tremble at the time of its biography.  Great Northumberland House was being pulled down and there was movement afoot to do the same in Kensington where this rival to Lansdowne House still remained.