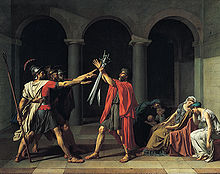 At the time of my story Notorious Match, painting, along with the other fine arts, was transitioning toward Romanticism.  Think Turner and Constable.  In the next few posts, the blog will concentrate on painters of the Regency period and how their visual interpretation of subjects greatly affected their audience in England.

Neo-Classicism was in full force by the time of the Regency in England.  Paintings were eschewing the rococo manner so beloved by the ancienne regime to become more commonly executed in a formal, restrained manner, using classical subjects ranging from mythological figures to Corinthian columns.

Like previous styles of painting, and future ones to come, neo-Classicism was eventually taken over by the political movement of the times.  At the height of his power, Napoleon discovered an affinity for the symmetric, incisive nature of the classical heroic movement and used it to demonstrate his own personal power and that of the Republic.

He chose for his portrait painter Jacques-Louis David, a major contributor to the stylistic painting of this period both in France and England.  David had rejected the earlier passion for indolent aristocrats riding beribboned swings, pursuing love and other nonsense among flowers.  He hated rococo, you see. So much better to paint great gods of Olympus and sturdy mortals of Rome imposing order by sword and mighty oaths.

By Jove, it makes one want to get to one’s bootmaker and demand a pair of dashed sandals.

David was an ardent supporter of the French Revolution and had been favored by Citizen Robespierre, before the fellow got himself guillotined.

It was David who executed the famous, but dreary pencil sketch of a grim Marie Antoinette awaiting Madame La Guillotine.  He voted as a member of the General Assembly to have Louis XVI executed.  It was alleged he participated in the death of the young dauphin after the boy was forced to testify against his mother on several crimes, including incest, to secure her execution.

It was not as easy to execute women in those days, you see.

One of David’s great friends was the revolutionary Paul Murat, an architect of the Terror.  The artist was so distraught when Murat was found murdered in his bath, he painted one of art’s great masterpieces, immortalizing him and the revolutionary for all time.

“(It was) a moving testimony to what can be achieved when an artist’s political convictions are directly manifested in his work.”  Boime, Albert (1987), Social History of Modern Art: Art in the Age of Revolution, 1750-1800 volume 1, Chicago, IL: The University of Chicago Press, ISBN

Napoleon commissioned David to create the giant Coronation mural as well as the famous Marengo painting (above).  The painter died an exile from France after Napoleon’s defeat, run over by a carriage.

Diana asked Griffin about his family.

“My father left Wales for France after some scandal,” he told her.  “A scandal I’m sure your grandmother, Lady Nellie, can better explain than I.  In any case, I never knew him.  He married my mother, the daughter of a minor noble, but left her for Paris after I was born.”

“Who raised you?” Diana probed.

“Mostly my grandfather.   My mother was killed when I was ten.  During the Revolution.”

“No, she was not a victim of Madame la Guillotine,” he explained, matter-of-factly.   “Instead, my mother was hung.  For conspiring to murder the revolutionary Jean-Paul Murat.”

“Good God.  Wasn’t it Charlotte Corday who stabbed him in his bath?  The one they call the Angel of Assassination?”

Griffin nodded.  “My mother and Charlotte were schoolmates in Caen.  When Charlotte was arrested for killing Murat, my mother went to Paris to beg for her freedom.  She was warned to stay away on penalty of death.  But she could not.  It seemed incomprehensible to her, you see, that her beloved friend should be executed for killing one man to save one hundred thousand.” 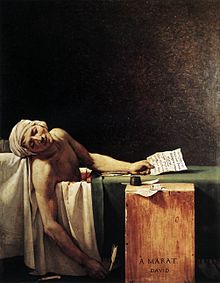 4 thoughts on “Regency painters – Part One”