This Blog has often addressed the burgeoning need for access to the arts during the Regency period. Muzio Clementi (1752 – 1832) was the man who brought the music to the age.

The father of the piano

Born in Italy, as a young man he came to England at the behest of his patron, Sir Peter Beckford, to develop his musical talent and entertain the Lord Mayor’s country household. His public performances as a pianist and organist were quite the treat for a provincial audience far removed from London. It was perhaps inevitable that Dorset would not hold him forever, and upon his release from obligations to Sir Peter, he was on his way to the Metropolis, and fame.

He was to become the musician to the Regency.

Late Georgian England was already attracting many accomplished composers from the Continent, including Joseph Haydn and Mozart. Upon his arrival in London, Clementi began composing, and his talent aroused great interest among the ton, and notice among the great masters. 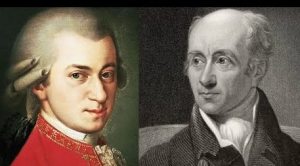 Mozart: ‘Clementi is a charlatan, like all Italians.’ Clementi: ‘Until (Mozart) I had never heard anyone play with such spirit and grace.’

His talent took him to the Continent as well. Among his first performances was the famous competition between himself and Mozart, before the Imperial court of Austria. But unlike poor Salieri, Clementi held his own against the better-remembered Mozart, astonishing the emperor and those in attendance. Indeed, the man later known as Amadeus gave the ultimate compliment to his rival, using Clementi’s beginning motif to his Sonata in B-flat Major, No. 2 in the famous overture to The Magic Flute.

Back in England, Clementi’s influence was considerable, finding its way into music rooms and parlors, figuring largely in lessons on the pianoforte. His compositions were considered most challenging, being intricate and often difficult to play, despite their ‘simplicity, brilliancy and originality.’

“The celebrated John Christian Bach (son of John Sebastian Bach’s second marriage) spoke of (Clementi’s Opera 2) in the highest terms; but although one of the most able players of the time, he would not attempt its performance….his works ‘could only be performed by the author or the devil himself.’ ”

Composing and performing were not particularly lucrative. Clementi supplemented his income by publishing the works of other composers, in addition to his own. He used his connections with notable musicians to gain exclusive rights to publish their compositions, fulfilling increasing demand for sheet music, both for piano and flute.

Beethoven made his nephew play these exclusively. My piano teacher employed the same philosophy with me.

From his publishing company’s Appendix to their Catalog of 1816:

Clementi & Co., having established a Correspondence with several of the most respectable Continental Publishers, they have entered into such arrangements as will enable them to supply their friends and the public, at a short notice, with Correct Editions of the most esteemed Productions of the Foreign Musical Press.

Having a robust musical library was just as important as having a large and varied collection of books. Scattered sheets of music, however messy, was a mark of distinction for any household.

Clementi was the exclusive publisher of Beethoven’s compositions sold in Britain.

Clementi also had a piano factory, building instruments that incorporated his designs to improve their performance. Innovations in case construction allowed a pianoforte to retain its pitch and tone longer, so that tuning was not so frequently required. Clementi also patented a process that allowed strings to be attached directly to the soundboard, lengthening tone and increasing resonance.

‘..old-fashioned square parlor…the proper air of confusion by a grand piano-forte and a harp..’ Persuasion, by Jane Austen
photo via bestbrodipianos.co.uk

Unfortunately the manufacturing plant was destroyed by fire in 1807, from a stove flue that ignited surrounding woodwork. The engines for putting out the fire arrived fairly quickly, but were unable to stop the destruction because, as the Athenaeum of 1807 reports,’no water could be procured for nearly an hour after.’

His obituary summarizes his remarkable career with special tribute paid to Clementi’s humanity, his kindness to others*, his capacity for feeling. Noted with sadness is the composer’s suffering over the death of his first wife in childbirth, and his son’s premature demise from a pistol’s accidental discharge.

“The cheerful noon-sun shone through the cathedral windows when the procession began to move…it was the illumination most befitting so clear and natural a spirit as Clementi.”

In Austen’s novel Persuasion, Captain Harville and Anne discuss ‘the richness of the present age.” It is perhaps no small surprise that the father of the piano should have inhabited the Age of the Regency, and adorned its music.

* He was known to have sponsored a subscription fund for the widow of fellow composer John Gildon, so that she could live in comfort, and even start a business. Ackermann’s Repository (vol 10, July 1813)