During the Regency era, electrical shock was beginning to be used at various times to revive persons knocked unconscious from blows to the head. I’m not sure this would have benefited Louisa Musgrove, but it brings up interesting notions about the advances of resuscitation in the late Georgian era. 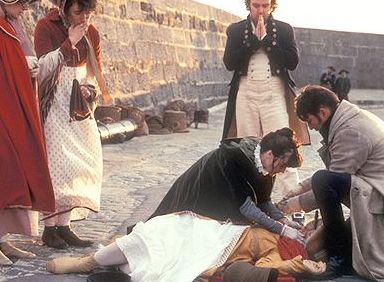 “…but no, he reasoned and talked in vain, she smiled and said, “I am determined I will:” he put out his hands; she was too precipitate by half a second, she fell on the pavement on the Lower Cobb, and was taken up lifeless!” — Persuasion, Jane Austen

Persuasion’s Anne Elliot is my favorite of all Jane Austen’s characters–mostly because she is quite useful in an emergency. When calm is required, she remains practical and wholly free from the hysterical outbursts that characterize her sister’s behavior. Such excellent qualities are demonstrated not only when her young nephew suffers a fall from a tree, but after Louisa Musgrove’s dreadful fall, as she is knocked out cold.

Dr. James Curry notes that falls often stun the victim into a state of apparent lifelessness. The heart stops and does not restart until the brain is roused sufficiently so as to direct it to begin beating again. Many times this occurs without intervention; however, stimulation must be employed when the victim does not rouse on her own:

“Stimulants of every kind have this tendency in a greater or less degree, but none so much as Electricity.”

Dr. Curry cites two examples of children rendered unconscious from falls down steps. Fortunately, in both cases, neighbors with the right apparatus were able to apply electricity to the chests of each boy, with the happy result of reviving both. Apparently assembling a machine to generate mild electric shocks was something that could be done with readily available materials, but only by knowledgeable persons:

“..jar of twenty-four inches, or thirty inches coated surface, and the discharging electrometer placed about one-third or one-half of an inch from the knob of the jar, or from the prime conductor; accordingly as it is applied from one to the other, in the machine used.”

Dr. Curry goes on to relate that from this machine discharging rods may be connected (and he goes into some detail about their assembly) which when applied to the body can be made to pass electricity through it.

The effect of reading Persuasion is much the same–electrifying the heart with such simple stimulation.