Sydney Smith was another visitor to Lansdowne House.  He was a minister, with a lively sense of fun that had everyone rolling in London, as well as in the church aisles.

His quotes from http://www.brainyquote.com/quotes/authors/s/sydney_smith.html are amusing, and speak for themselves: 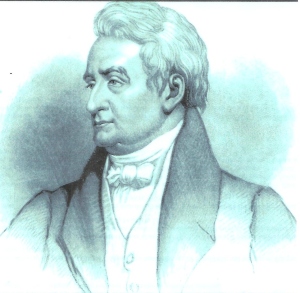 A comfortable house is a great source of happiness. It ranks immediately after health and a good conscience.
A great deal of talent is lost to the world for want of a little courage. Every day sends to their graves obscure men whose timidity prevented them from making a first effort.
Among the smaller duties of life I hardly know any one more important than that of not praising where praise is not due.
As the French say, there are three sexes – men, women, and clergymen.
Bishop Berkeley destroyed this world in one volume octavo; and nothing remained, after his time, but mind; which experienced a similar fate from the hand of Mr. Hume in 1737.
Correspondences are like small clothes before the invention of suspenders; it is impossible to keep them up.
Do not try to push your way through to the front ranks of your profession; do not run after distinctions and rewards; but do your utmost to find an entry into the world of beauty.
Errors, to be dangerous, must have a great deal of truth mingled with them. It is only from this alliance that they can ever obtain an extensive circulation.
Find fault when you must find fault in private, and if possible sometime after the offense, rather than at the time.
Great men hallow a whole people, and lift up all who live in their time.
Have the courage to be ignorant of a great number of things, in order to avoid the calamity of being ignorant of everything.
Heaven never helps the men who will not act.
I have, alas, only one illusion left, and that is the Archbishop of Canterbury.
I look upon Switzerland as an inferior sort of Scotland.
I never read a book before previewing it; it prejudices a man so.
In composing, as a general rule, run your pen through every other word you have written; you have no idea what vigor it will give your style.
It is safest to be moderately base – to be flexible in shame, and to be always ready for what is generous, good, and just, when anything is to be gained by virtue.
It is the greatest of all mistakes to do nothing because you can only do little – do what you can.
It resembles a pair of shears, so joined that they cannot be separated, often moving in opposite directions, yet always punishing anyone who comes between them.

11 thoughts on “A Reverend in Lansdowne House”