I had always thought Rotten Row was a corruption of Route du Roi.  But it turns out that this name for the main bridle path in Hyde Park prominently featured in Notorious Vow is in fact a common street name throughout Britain.  It can refer to a row of decrepit cottages infested with rats to the roundabout one often encounters in and out of London. 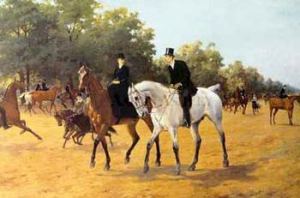 My heroine has several alarming encounters along Rotten Row which her horsemanship saves her in all but one, toward the end of the book.  Her encounter with the Earl of Northam along this deserted track is one of my favorites:

Russell was convinced Vivien had a grasping desire to be taken up by a viscountess who was a leading figure of the ton.  And this belief was soon rewarded as he spotted her trotting up the path.  Yet he remained rooted where he was, in the trees, admiring her lovely grace as she urged the gray toward him.  His mother’s reference to his last mistress came unbidden, and he considered what it might be like to have Miss Montgomery installed in his Piccadilly love nest.

“Dash it!”   It was almost too late by the time he had roused himself from staring at his quarry.  He goosed his horse onto the path, a scrambling business that in retrospect was comical if it had not been so deadly serious.

Vivien came up Rotten Row with much of the happy anticipation she experienced before the terrible disappointment two days before.  So she cautioned herself.  Diana may have had second thoughts about meeting her.

Thor seemed to sense her doubt, flicking his ears back and forth.  Vivien leaned forward to stroke his smooth coat.  He needed exercise.  And she was persistent, urging him into a canter.

Without warning, Thor gathered himself in mid-stride, ears pricked forward as if to catch the sound of something ahead.  Vivien smiled and urged him forward, expecting to see Garnet and her rider ahead on the broad gravel path.

She was dismayed to see instead a familiar dark bay horse abruptly emerge from the trees.

“You needn’t look so surprised, Miss Montgomery,” the earl said, ranging his mount across the path.  Blocking her way.