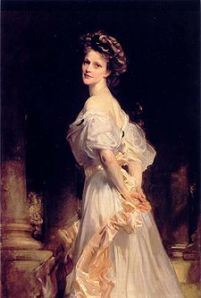 I declare my heart went out to Anne Elliott in BBC’s 1995 adaptation of Jane Austen’s Persuasion.  Her elder sister Elizabeth, a wretched creature, positively screams at poor Anne for failing to perceive the importance of their family connection to the Dowager Lady Dalrymple.  “She is a viscountess!”

Elizabeth exclaims before her father, Mrs. Clay and all the servants.

You can view this marvelous scene at http://www.youtube.com/watch?v=knmXLb_gJeY&feature=related, 6:20.

What in the world is a viscountess?  In short, the female equivalent of a viscount.

Historically, the word comes from the French vicomte, which means deputy/companion of a leader.  My favorite example of a vicomte would be Roger of Montgomery, to whom William, Duke of Normandy, entrusted his duchy during the Conquest of England.  Roger was an able administrator, and helped William’s duchess Matilda keep matters in order while the Conqueror was away.

In England, the viscount is a hereditary title that normally is conferred upon the heir of an earl.  And his wife would be known as viscountess.  The title may refer to a place, or to a family name.  Dowager Lady Dalrymple is the widow of the Viscount Dalrymple and so she is known Viscountess Dalrymple.  In Persuasion, Miss Austen tells the reader her daughter’s name is Miss Carteret, this being the surname of her father, Lady Dalrymple’s husband, so we can surmise Dalrymple is a place name that is associated with the title.  The character analysis from Schmoop explains this rather well.  See http://www.shmoop.com/persuasion/dowager-viscountess-dalrymple.html.

Diana explains to Vivien that it was her uncle who named her Viscountess Northam in a public vow that scandalized the ton for years:

“You see, Miss Montgomery, Northam’s legacy rules us all.”

“Does your uncle, I beg your pardon, does Lord Northam know your feelings about this?”

“Perhaps.  But it would not matter.  He is obsessed with his vow that arranges all our affairs, including the succession to Northam and all that comes with it.  When my father died, Northam passed to Uncle, his brother, instead of to me.  I was too young and underage females cannot inherit the earldom.  A law or something, I believe.  Happened ages ago…..At any rate, Uncle thinks he can skirt the rules by never marrying.  So that when he dies, it will all come to me.”

“But that is monstrous,” Vivien was moved to say.  “Why should he conceive of such a thing?”

“Because he blames himself for my father’s death.”