Continuing the Regency maid-servant’s “sketch of character,” we find she must suffer irritations all day, and without complaint.

In 2001’s Gosford Park, Lady Sylvia McCordle is the mistress of a great country house. The head house maid is Elsie. One evening, while entertaining a host of guests, her ladyship finds the temerity to interrupt dinnertime in the servants’ hall to inquire about a vegetarian meal for a tiresome American guest.

Cook pointedly turns her back on her. The housekeeper then assists, receiving a wealth of thanks and relief. 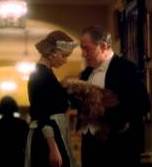 Elsie is an Edwardian-era maid-servant. But for purposes of illustration, she is timeless.

For the maid, there is no such luxury of ignoring a request nor expecting thanks for fulfilling it. She must obey the summons, whenever they come, even to the point of interrupting her meal. How she handles these annoyances without complaint, suppressing the very human reaction of irritation, makes her a far more interesting character than Cook, and even the housekeeper. Her position in the “down-stairs” hierarchy affords her no cushion.

She can’t always be successful, however, and:

“..she gets into little heats when a stranger is over saucy, or when she is told not to go down stairs so heavily, or when some unthinking person goes up her stairs with dirty shoes..” 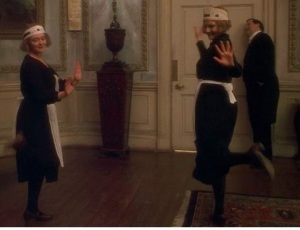 “..if there is a ball given that night, they throw open all the doors, and make use of the music up the stairs to dance by.“

There are distractions. One of these might be a fellow servant singing a new song. If in town, she might espy a neighboring house’s maid through an open window, and enjoy an impromptu chat. Even better, a troop of soldiers might be going by.

And after the day’s work is done, and dinner is finished, interrupted or not, there is a bit of a candid discussion of the day’s events with the others in service, without regard to hierarchy. Surprisingly, she might play a game called hot cockles, which obliges her to kneel, blindfolded, her head on the lap of another, her hand palm-up on her back, all to guess the identity of whoever walks by and smacks it.

How others treat the Regency maid-servant is even more instructive. Tradesmen stop in at all times of the day, delivering their goods to the house. “Come, pretty maids,” says the milkman, followed by the butcher, the baker and the–well, you know the drill:

“…all with their several smirks and little loiterings.”

And if she is dispatched to pick up a bit of butter, the grocer makes a big deal out of it:

“For her, the cheese-monger weighs his butter with half a glance, cherishes it round about with his patties, and dabs the little piece on it to make up, with a graceful jerk.”

Along with the sailor and the schoolboy, we are told, the maid-servant is “a creature of sheer enjoyment,” and relishes the holiday more than “the rest of the world.” If in London, she’ll have been to Vauxhall, and the Tower with its beasties, and viewed all the tragedies at the playhouse, for they are far more to her liking than comedies.

If country-bred, the fair is her favorite, for it is there she can truly forget her place in the world, and be treated much as they are up-stairs.

“Here she is invited in by courteous, well-dressed people as if she were the mistress..(they) call her Ma’am..and says..Be good enough, Sir, to hand the card to the lady.”