Much has been written of Sir Thomas Lawrence (1769 – 1830), self-taught prodigy and “Romantic Portraitist of the Regency.” These illustrations almost always mention Miss Elizabeth Croft, his close friend and supporter.

The days she spent with the Artist and his circle of intimate friends formed the best part of her life, she later declared. Her treasured memento was his acutely melancholic portrait of her dead half-brother (the famous suicide Sir Richard Croft, attending physician at Princess of Wales’ deathbed). Her legacy to us is the collection of anecdotes which Sir Thomas had passed on to her–a brilliant and intimate portrait of Regency society.

There was never anything lover-like between them, as far as anyone could tell. Indeed, Miss Croft served as something rather different to the Artist as she bustled about his studio. She was, as the saying goes, a managing female.

Those old Pan covers were marvelous.

‘Oh, dear!” said Miss Merrivale, stricken. “And I took such pains not to appear to be a managing female!’

As Sir Thomas Lawrence was in such demand as Europe’s portrait painter, he frequently got behind in his work. Miss Croft was well aware others thought he was indolent and unproductive:

During all this period I can with truth report that he painted from sunrise to sunset, except in the hours that he devoted to the correction of engravings and those of his hurried meals..

Take Isabella Wolff’s portrait, twelve years in the making.  The sitter was the wife of a Danish official in London, Jens Wolff. She, along with her sisters, had been members of Miss Croft’s circle.  When one of Isabella’s sisters complained about the time it was taking to finish Isabella’s portrait, the artist, stung, promised to finish it as soon as the sitter could be persuaded to return to London.

This she did, but after only a few sittings she was off again, before the portrait could be completed. What remained was the most intricate part of the painting–executing the folds of Mrs. Wolff’s white satin dress. This last was accomplished by reason of Miss Croft donning the “drapery” and sitting for the remainder of the portrait. 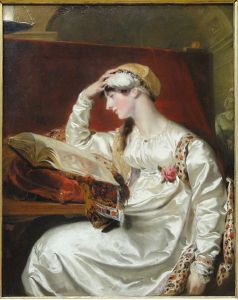 One can only imagine Miss Croft’s gentle impatience.

In the end, Miss Croft was justly proud of her participation, reporting how Mrs. Wolff’s portrait had been given a place of honor at an 1815 exhibition alongside those of Wellington, Blucher and Platoff. The newspapers, she recalled, all agreed that “the lady reading by the lamplight was indeed a miraculous picture.”

6 thoughts on “Portrait of the Regency – “A Miraculous Picture””