The last of these Regency brothers, Jonathan Martin became the best known for the worst of reasons–he was the Incendiary of York Minster.

But before that, he was the scourge of the Regency’s churches:

“No Covenanter, no Cameronian, ever pursued Episcopacy with a bitterer hatred or more impassioned denunciations than he. All the anathemas that Luther directed against the Church of Rome, Jonathan inflicted on the Church of England.” — All the Year Round by Charles Dickens (vols. 15-16, 1866) 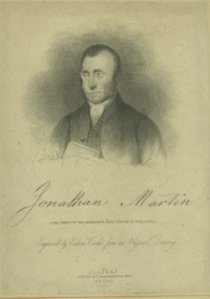 In 1804, after a period of being apprenticed to a tanner, Jonathan Martin decided to see the metropolis of London. He was a twenty-two year old raw lad from Yorkshire and easy prey. Having confided to a stranger he should like to see more of the world, he was swept up in the clutches of a press-gang and made to serve aboard the Hercules in the Copenhagen campaign under Lord Nelson. After a successful engagement against the French, Martin’s ship set off for Lisbon. During this voyage, Martin related a number of fanciful dreams and excursions he had taken, even seeing the buildings Joseph used to store grain against Egypt’s future famine. This vision was evidence of his future calling–to warn and prophecy against coming doom.

Martin’s shipmates remember him always preaching and exhorting them. He didn’t pray much, apparently, preferring to argue with others on religious subjects instead. He always enjoyed talking about the stars observed on board ship, but would quake at the thought of anyone pointing at a celestial body. It is said in Yorkshire that to point to a star would mean certain death, as it is a grave sin.

His shipmates had mixed emotions about him. Some thought his behavior was very odd, dangerous even. Once he fell from the top mast of the ship, catching the hair of a shipmate on the way down and tearing off part of the poor devil’s scalp. Another time he complained his book had been shot from his hand during battle. He took it as a warning from heaven. His shipmates took it to mean “he ought to have been otherwise employed rather than in reading at such a time; a reply to which he abused the person who rebuked him.”

He was also remembered for being absolutely fearless, once dousing a fire set off by a gunner’s yeoman below decks when everyone else was making for the lifeboats. He would calmly sing psalms in the mortar boat, an auxiliary vessel for firing additional munitions, oblivious to the hazards attendant to navigating the open sea in a leaky container filled with a large amount of explosives. The sharks that followed the ship (for many had died and their bodies were discharged overboard) were of little concern to him. He would oblige the crew and catch one or two for eating, hooking them with burnt bricks disguised in the funereal shrouds the fish had learned to recognize as a covering for their next meal.

It was a deception which he eventually abandoned, convinced that God could not be happy with such guile that fooled his creatures.

Martin left the navy and returned to Yorkshire, taking up farming and marriage. After attending a Methodist service, he became entranced with the notion that his hitherto random existence was for a specific purpose and completely justified by his faith in God alone. To his wife’s dismay, he broke off farming for preaching and was soon berating what he considered Regency England’s greatest evil–the Established Church and in particular the laxity of its clergy which always “pursued parties, balls and plays.”

When no one was in a church, he would break in and hide himself in the pulpit until the service began, at which time he would leap up and begin to preach, with “violent gesticulations.”

“I was glad to hear so good a report of him, and concluded that if he really were so good a man and so eminent a Christian, he would not fear death, and (I) resolved to try his faith by pretending to shoot him(!)” — from Jonathan Martin’s memoir which appears in The Incendiary of York Minster

Already convinced those dreadful Methodists had unhinged her husband, Mrs. Martin had threatened to leave him if he did not leave them. All seemed well when they threw Martin out, until Mrs. Martin observed her husband had obtained an old pistol from his soldier brother in Newcastle. She asked him what he was going to do with it and he, in his usual forthright fashion, told her his intentions. Quietly she removed the pistol when he wasn’t looking.

Martin was taken in for questioning when word got around about his intentions. Eventually this led to his commitment to an insane asylum and onto greater notoriety.

His wife died in the meantime, leaving a son who later committed suicide over his father’s misfortunes.

There are those who caution against thwarting God’s will. Don’t forget about the will of one’s wife.

4 thoughts on “Regency Brothers — the Arsonist”