Homage to Diana - Annibale Carracci (circa 1597)

Diana paused as he stopped in his tracks.  Swallowing her impatience, and her hunger, she looked about her as Griffin did, trying to see Northam Park through his eyes.  She supposed he was right to be astonished.  The first-time visitor to the mansion had little warning of its riotous interior.  Not when its exterior was executed in forbidding Palladian style, with its straight lines and rigid symmetry.

Here in the great saloon, and throughout the house’s state apartments, Rococo reigned.

To look at it will put your eyes out, her grandmother, the dowager countess, would say.

Griffin craned his neck to take in the lighthearted, delicate playfulness of intricate, flowing lines, shells, leaves and trees carved in plasterwork that seemed to float through the saloon.  The elegant carvings cascaded across the high ceiling and down pale yellow walls in intricate white traceries.  He went to the carved stone chimney piece with its life-size nude wood nymphs supporting the mantelpiece.

Griffin gestured to the large bas-relief above the mantle of a beautifully sculpted scene from Greek mythology.  In it, the hunting moon goddess considers a gift of white fleece held aloft by the nature god .

“I never noticed Diana and Pan were so popular.”

Diana rolled her eyes.  “Try being named Diana.  Then you notice it every time.”

Griffin’s smile was half-sided.  “Does she accept the gift or not?”

Diana straightened her skirt and looked toward the door.  “It depends on what Pan wants in return, I suppose.”

Northam Park’s interior plays an important part in Notorious Match.  There is a lot of symbolism, both intentional and otherwise, that the characters encounter during their sojourn at the country estate, beginning with the aforementioned saloon.

The saloon is derived from the French Grand Salon — a room of state for receiving visitors.  It was a style set during the Restoration in England and initially attached to the more medieval great hall before replacing it almost entirely by the time of the Regency.  Northam Park’s saloon looks very much like the one at Hagley Hall in Worcestershire, the subject of last week’s post. 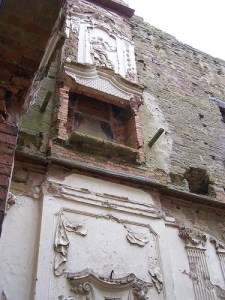 The Rococo interior is marvelous.  It can put your eyes out.

The picture to the right is from the ruin of Sutton Scarsdale, discussed in an earlier post.
You can see the remains of the Rococo plasterwork that still clings to the shell of what remains from this once monumental country estate.